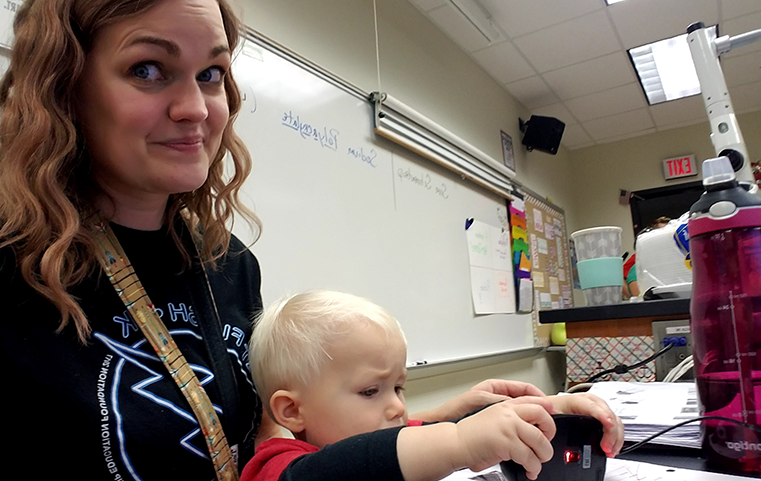 Natalie Parsons is a middle school teacher from Indianapolis who's passionate about teaching growth mindset to her students—and their parents. Learn more about her background in this Remind educator spotlight.

Natalie’s teaching career started back when she was in high school. She took on extra responsibility as the choir department’s student president and choreographer, organizing rehearsals and coaching her peers. After graduating, she planned to attend Belmont University on a vocal music scholarship, but her choir teacher had other plans for her.

“She refused to sign the final recommendation that I needed for Belmont,” Natalie says, laughing. “She sat me down and said, ‘You need to become a teacher.'”Natalie took her teacher's advice and attended Indiana University, where she majored in education—and realized that her choir teacher had been right.

"I got that feeling that every teacher gets in their heart. Teaching was the most fulfilling job for me."

The power of yet

When Natalie joined Franklin Township Middle School West in Indianapolis as a 6th grade science teacher, she learned that the theme for the year was growth mindset: the idea that basic abilities can be developed through hard work. "A sixth-grader might get frustrated because they don't know how to calculate velocity," she says. "Growth mindset teaches them that they don't know how to yet, but they can get there with practice.

"Thanks to weekly character education classes, students quickly started displaying "power of yet" thinking, getting less frustrated with homework, turning in assignments more frequently, and even promoting the mindset with their peer groups. When parents asked what they could be doing at home to help their children succeed, Natalie put the pieces together.

"If I could share growth mindset with parents—the same way I say, 'Picture day tomorrow!'—I could show students that we're all on the same team."

Every Friday, Natalie uses Remind to share strategies that help families cultivate a growth mindset at home. She uses Google Slides to create the slides, saves each slide as a .jpg image, and attaches the image to a Remind message.

These messages are a huge hit with parents, who regularly give positive feedback using the Reactions feature and during parent/teacher conferences. "They began having conversations that they didn't think their twelve-year-old children were capable of having," she says.

When Natalie logged into Facebook to share her success with the Remind Connected Educator group, she wasn't expecting a special response. Instead, she received over over 200 likes and dozens of comments from educators asking for more information.

"I was overwhelmed by the enthusiasm that people were showing," she says. "Talking to other educators who were passionate about sharing growth mindset felt really cool, like I was doing something right."